GLOBALIFE FOUNDATION is a non-profit organization promoting and propagating human values and defending human rights in all spheres of the world through service projects such as educational, social, economical, cultural, medical developmental programmes which are still remote in access for millions of people.

To make our Mother Land Green

If you increase your personal petrol or gas consumption for this year by say 1'000 litres because you use the car more often, will this lead to natural disasters? And if yes, where? Nobody will be able to take you to the court, because it is not possible to prove a direct relation between your increased yearly consumption of fuels and a drought in Africa. This does not change the fact, however, that the CO2 emission produced by your car does indeed contribute to the global warming. No doubt, you and I are responsible for the climate change, too.

The following testimonies are typical:

These declarations share a fundamentally wrong assumption that we are not fully responsible for what we do. But the contrary is true: We are indeed fully responsible for everything we do or do not do! The fact that we don't get fined or taken into prison for certain deeds does by far not mean that these deeds do not have a big impact on our personal future life.

The goal of all human beings is to live in joy and perpetual harmony with oneself and with the environment, to be able to enjoy life free of sorrows and fears. We approach this goal step by step over a series of incarnations.

Let's compare this with classes in school or with a study at the university: Based on your performance within the current semester, you can either advance to the next higher level or you will have to repeat the current level until you meet a certain performance criteria. In a similar manner our behavior in daily life decides whether we approach the above mentioned goal of perpetual harmony with ourselves and with our environment or not.

Hence it should become evident that harming or even destroying nature - i.e. our environment and basis of being - does at the very end hinder ourselves most: We harm or destroy exactly what we eventually wanted to get in unison and harmony with.

In regard of the common rude and thoughtless dealing with nature, the above may sound rather hopeless for our future. For your personal development however, only your personal behavior counts and not the behavior of "average people" or of a certain majority. It's only about you! Therefore it is possible to develop yourself when you limit your negative footprint of your life here on earth (e.g. consumption of resources, pollution of the environment) to an acceptable level. This is your contribution to solving the problem.

On the other hand, it is impossible to get in perpetual harmony with yourself and with your environment if you do not limit your negative footprint to an acceptable level. It is also a matter of respect towards nature and all its creatures.

There is absolutely no reason at all to wait for laws or incentives from the government before you start with your personal contribution. Who, he does this immediately and by free will, will automatically get better conditions for his or her personal future - be it in this or in next incarnations. For the personal development, only decisions made by free will really do count. There will be very little effect on your personal development if you buy a more economic car because you cannot afford the fuel for a larger car any more. However, if you decide to buy a more economic car of your own free will because you want to reduce your negative effects on the environment, as reverence for the nature, then this will certainly have positive effects on your personal future.

Maslow's Hierarchy of Needs is a theory in psychology that Abraham Maslow proposed in his 1943 paper A Theory of Human Motivation, which he subsequently extended.

His theory contends that as humans meet 'basic needs', they seek to satisfy successively 'higher needs' that occupy a set hierarchy. Maslow studied exemplary people such as Albert Einstein, Jane Addams, Eleanor Roosevelt, and Frederick Douglass rather than mentally ill or neurotic people, writing that "the study of crippled, stunted, immature, and unhealthy specimens can yield only a cripple psychology and a cripple philosophy." (Motivation and Personality, 1987)

This diagram shows Maslow's hierarchy of needs, represented as a pyramid with the more primitive needs at the bottom.

Maslow's hierarchy of needs is often depicted as a pyramid consisting of five levels: the four lower levels are grouped together as deficiency needs associated with physiological needs, while the top level is termed growth needs associated with psychological needs. While deficiency needs must be met, growth needs are continually shaping behaviour. The basic concept is that the higher needs in this hierarchy only come into focus once all the needs that are lower down in the pyramid are mainly or entirely satisfied. Growth forces create upward movement in the hierarchy, whereas regressive forces push prepotent needs further down the hierarchy. 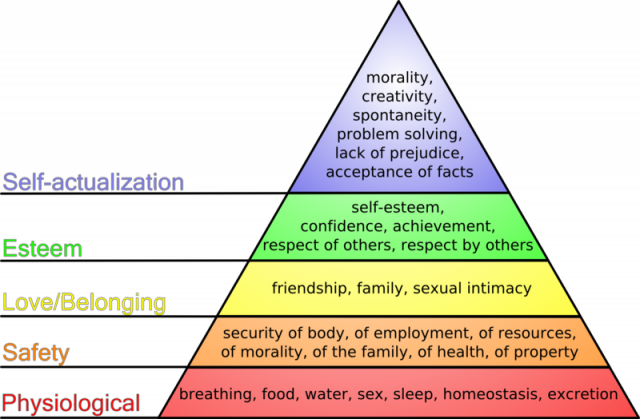 At the top of the triangle, self-transcendence is also sometimes referred to as spiritual needs.

Maslow originally found the occurrence of peak experiences in individuals who were self-actualized, but later found that peak experiences happened to non-actualizers as well but not as often. In his The Farther Reaches of Human Nature (New York, 1971) he writes: